What is the Cone of Experience?

Gather 'round kiddos, Uncle Lubos wants to tell another crazy but true story. This one is about an innocent kid, an abused model—and if you stick around till the end—a wholesome apple.

Our story begins back in my college days, back before phones had Google and books came with free Prime shipping. One of the books I'll never forget wasn't a book per se, but a bulky three-ring binder of recommended reading for future leaders. Distributed to members of a student organization I was in, this "book of insight" devoted a section to how people learn.

As a business student with no prior exposure to cognitive psychology, I found the thinking and learning section utterly fascinating. A particular object of fascination—one that offered immediate value to me as a learner—was Edgar Dale's Cone of Experience. The version I saw looked similar to this: 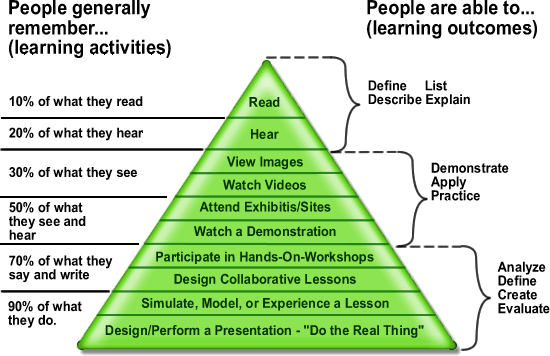 So people learn more from doing than they do from reading? Duh, I didn't need a diagram or a psych PhD to tell me that. What struck me was the "how much." Why would I read to study for exams if I'm only going to remember 10%? Aha, but if I say and write... hello 70%?

My instincts told me to trust the cone. No more rereading notes before finals! I would jot down the important parts like they're notes for a speech, then walk around and act like I was doing a presentation. And guess what—it worked! Semester after semester this recipe for remembering served up a hearty menu of mostly A's and B's.

After graduation, the cone and I went our separate ways. While I jetted off to my first corporate job, it made its rounds training the trainers. We didn't cross paths again until many years later, when a casual Google search revealed the "truth" about my cone-inspired routine.

Yes. I did get coned. Check out Dale's original 1946 Cone of Experience. Quite different from the usual depiction, isn't it?! 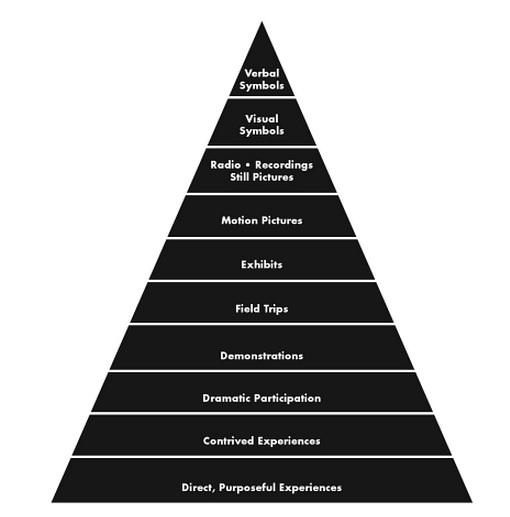 Experiencing the REAL Cone of Experience But enough of theories and models. Let's take Dale's cone for a spin...

Absolute abstraction. We can't get much further away from reality than reading about it on paper or screen. Verbal symbols bear no resemblance to the objects or ideas they stand for. However, they readily convey an endless range of subject matter terminology, concepts, principles, formulas, and other knowledge.

PRACTICE: Read this word: jablko Fun word, huh? It means apple in Slovak, my mother tongue. The letters J-A-B-L-K-O and A-P-P-L-E don't look, sound, smell, taste, or feel anything like actual fruit. What they do share is a common meaning that native Slovak/English speakers learn at a very young age.

If everyone could examine numbers like Ben Affleck in The Accountant, charts and graphs would serve little purpose. To recognize patterns and relationships in numeric data, most of our brains prefer the visual interpretability of bars, lines, and scatterplots.

Of course, visual symbolism isn't just for money and statistics. Flowcharts convert stages of operation into basic shapes and arrows—org charts do the same for what people do and who they report to.

Diagrams and schematics reduce the assembly, operation, and repair of concrete objects into simple illustrations free of irrelevant detail. Parts of the earth? Maps. Events from the past? Timelines. Just about any reality we need to explain clearly can be easier to understand with visual symbolism.

A feast for the eyes OR ears.

Level 3 represents unisensory media that we can experience in no fixed order—photographs and audio recordings.

PRACTICE: Click the stock photo of a jablko to open its Wiktionary page. Then play the audio clip of its pronunciation. 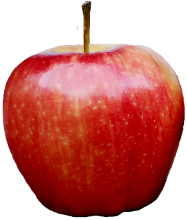 A MOVING feast for the eyes AND ears...

Meaningful displays with limited handling. Levels 5 through 7 open the door for—but don't necessarily let in—an expanded range of sensory and participatory experiences. While some exhibits are specifically designed for interactivity, others restrict learners to look but don't touch.

Sights and sounds of real-world settings. Aside from the occasional opportunity to hop in a fire truck or milk a cow, the main activity for field trippers is observing from the sidelines.

This is how it works and/or how you do it. Like the two previous levels, demonstrations may or may not include an element of participation. In some learning situations, seeing how to do something is of little value without trying it oneself. In others, either the demonstration alone is enough or hands-on activity is logistically unfeasible.

On this one, let's get straight to an activity...

PRACTICE: Either individually or with a partner, roleplay the following scenario in which a non-Slovak speaker desperately needs a specific piece of fruit:

Your Slovak friend has abandoned you at his parents' new country cottage, where you have just awoken from an extended, absinthe-and-jetlag-induced slumber. You would kill to bite into a crisp juicy apple.You wander into the kitchen only to discover that the brand-new residence has yet to be stocked with anything edible. While wobbling back to your cave, you plow torso-first into your Slovak friend's mother. Of course, she speaks not a word of English.After an agonizing exchange of gibberish and hand gestures, you figure out that she is going to the market and asking if you have any requests. Luckily enough, the one thing your craving is the only word you know in Slovak...On a notepad or sheet of paper, write the word apple in Slovak. Then hold it up and show it to your friend's mother as you enunciate the word and slowly nod.

Concrete reality. At last we hit the base of the cone—activities in which learners "do the real thing."

PRACTICE: State the Slovak word for apple. Then go grab the nearest apple and repeat the word as you touch, smell, and taste the apple. (Mentally repeat it while you chew the apple.)

So you learned something, right? At a minimum, how to say “jablko”, and you’ve retained its meaning. And hopefully you’ve  also learned (if you didn’t know it already), that while microlearning, mobile learning, attractive design, artificial intelligence, and virtual or augmented reality can be useful tools….the single most important aspect of the learning experience should always be…the learner and the experiences we as learning professionals craft for them. In all seriousness, any conscientious designer who creates training or learning assets designed to influence human behavior or elicit change perpetually seeks the ways and means to make the content more compelling and more engaging.